Guild leaders can create an alliance at a certain level by completing a quest.[2]

You can only invite a number of guilds to the alliance before you must form a new alliance; and then those alliance can have a de facto friendship but they won't have any game component of connection. What the alliance system would allow is pooling of resources into by guild leaders into an alliance guild alliance bank. Will allow certain participation in different quest lines. It will allow common area chat for members and it will allow affiliations and gear that can be attained as well.[5] – Steven Sharif

We have a specific system that relates to being able to invite another guild into an alliance that sets a flag on those characters with regards to being able to combat them, being able to share a chat system with them, being able to participate in specific types of quests and/or alliance warehouses and guild homes; with regards to the relationship of castle sieges and participating in node warfare and node activities. If you're not in an alliance with someone, you're in a neutral state so to speak. You can have trade agreements between different guilds and then you can also have Guild Wars which shows a state of war between you guys. I think that's the baseline of how we're going to develop interaction between guilds.[6] – Steven Sharif

Due to the lack of fast travel, guilds will need to plan to have people in the right place at the right time. Alliances with other guilds will help enable that.[7]

There's going to be some mechanics at play that could have even Alliance Wars so to speak: A war between guilds and a war between alliances maybe. When we delve into the blog about Guild Wars we're going to talk about alliances.[8] – Steven Sharif

When a siege begins, temporary alliances are formed among attackers and defenders.[9]

Many incentives exist that can benefit your node and yourself personally by participating in the attack or defense of cities. These range from titles, to items, to materials, to money. Additionally, aiding others may help you strengthen bonds when your assets are threatened.[11] – Steven Sharif

There won't be a civil war mechanic within nodes but there will be scope for internal political conflicts; such as undermining the current leadership and disrupting trade.[12]

We want consequences to matter and if that person got elected then you need to work within the means of the mechanics to get them unelected.[13] – Steven Sharif 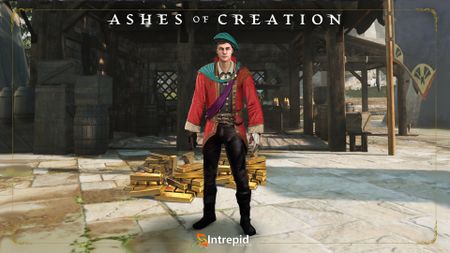 The government has a lot of say in the direction of the nodes development. Directing assets, building projects, tax allocation, defensive ability etc. Players have the ability to not only create these cities, but they have the right of self-governance.[18]

There are levers and dials that are present to both the owners of Castles as well as the elected officials of Nodes that during their administration they have the ability to impact and influence the region around them.[23] – Steven Sharif

Gilde do not control nodes.[24][25] Guild leaders (kings and queens) can become mayors of nodes.[26]

Guild’s also hold separate roles in the direction of the node, than the roles held by private citizens, and only a certain number of guilds may participate in these roles. Separate guild roles are reserved for Small size guilds, medium size guilds and large size guilds.[18]

Node governments may declare war on another node and rally citizens to the cause.[16]

We have conditions that you can set between nodes with regards to either nodes being friendly with each other and acting trade alliances, or they can declare war on nodes similar to how guild wars may function in different games, where those citizens become hostile to each other based on the player government that's elected in the particular node. So those systems all kind of cater to allowing a conflict that's meaningful and that also provides a non-imbalanced relationship between stronger guilds and not as strong guilds.[29] – Steven Sharif

An affiliation tree determines which entities can participate in attacks against other entities within its hierarchy.[30][31]

There's node citizenship. There's guild. There's alliance. There's party. There's raid. There's family. All of these types of affiliations have a hierarchy. The highest of which is your node affiliation: So your citizenship is your greatest superceding relationship, which means if you were a part of a guild and the guild has multiple nodes in which its members are citizens of, if there was a war between two of those nodes, the members of those nodes would be first and foremost citizens who defend that node, even against their own guild members.[30] – Steven Sharif

All of these things have some hierarchy; and within that hierarchy there's the ability to participate within certain systems. So for example, if you have a node that has fallen under your vassal state and you're a citizen of the parent node, then you could participate in a siege against the vassal node but if you're a citizen of the vassal node you could not participate as an attacker against the parent node; so there's a hierarchy, unless you were to renounce your citizenship.[31] – Steven Sharif